The Picton Magpies have been dealt a savage blow on their quest for a record fourth premiership in a row with the Country Rugby League banning two of their star players.

Jack Twist and Anthony Provost, both local juniors of the club, have each been handed 2 game suspensions for going ahead with a planned tour of Europe rather than play in the Country Bulls representative team in June. 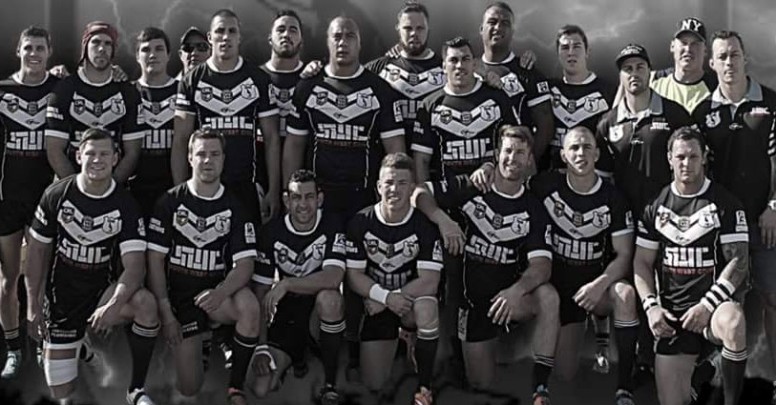 Group 6 Executive Officer Steve Hazleton, who advised the club of the ban, stated that the suspension was issued via a directive from the CRL. According to Hazleton, the directive states that the ban only applies once the players have been selected again by their club and they were not to advise the club of the suspensions until that time.
The Picton club are yet to see anything in writing from the CRL because, according to Hazleton, the directive came via phone call from Bert Lowrie, Operations Manager of CRL.
Hazleton declared that he would’ve preferred to have received the directive via email, but “what was I going to do, tell the CRL that, no I won’t be doing that unless I have it in writing?”
The news is especially bad for Provost since the club has been told that the suspension applies only once the players are available and named in a first grade team sheet again. Provost, whose European holiday extended a further week, now requires his team to lose this weekends’ major semi-final against the Camden Rams in order to play in the grand final and potentially win a fourth consecutive premiership.
Should Picton lose to arch-rivals Camden this weekend and win in the following weeks final against the winner of Thirlmere and The Oaks, then Provost can play in the decider. Twist, whose first game being suspended was the final round of competition, will be free to play after this weekend, regardless.
The players are predictably distraught. “We were both honoured to be named in the CRL team and would’ve loved to have played” said Twist. “We even priced up what it would’ve cost to change the holiday around to play in the ‘Bulls’ side, but we couldn’t afford it”.
Twist went on “It (the CRL commitment) was a week in Perth and we were never told when that was until we got the letter saying we were selected. What were we supposed to do, cancel our trip to Europe that we booked and paid for almost a year earlier?
When asked for his thoughts, Picton Secretary Karl Klein, responded “first of all, I don’t know where they’re (CRL) getting this two weeks from. Their own manual states that it (the suspension) only lasts until rep duties are finished.”
Klein was referring to the CRL Governance and Management Manual, point 1.15.2, which states that if a player ‘withdraws without approval’ the player ‘shall be ineligible to play for his club in any team until such time as the commitments of the relevant representative team in which he was selected have been completed’ (Pictured below).

When advised of the above clause, Chairman of Group 6 Graham Andrews responded that a policy declaring the 2 game suspension does exist. “It’s a policy” Andrews said. “The players signed a document prior to playing for Group 6 and they signed another one prior to representing the region (Greater Southern). If you’re selected for Country and you withdraw and the reason’s not sound it’s a mandatory two competition match suspension.”
Interestingly, both Picton players deny having ever signed such a document and, as yet, no one from CRL has been able to produce a copy with their signatures.
When asked for a copy of the policy that states the mandatory two game suspension Andrews replied that Hazleton would be able to send that along with a copy of the meeting minutes showing when the decision was handed down.
I later received a phone call from Mr Hazleton to say that he couldn’t send me the minutes, but could only show me in person. Earlier today I caught up with Mr Hazleton who produced a printed photograph of a single undated page of what was evidently the minutes from the meeting showing the action item.
The policy declaring the mandatory two game suspension which applies once a player declares themselves able to play again is also yet to be seen.
The CRL were unavailable for comment today but a representative did make contact to say that they will be responding to the issues reported in this story tomorrow.

If ever the Claytons Cup, the most prestigious team award in all of Country Rugby League, was to be jointly granted to two clubs from the same competition, it would be this year.

This Sunday at Victoria Park, Picton the Camden Rams and Picton Magpies will do battle in the major semi-final, to determine who will progress straight to the Grand Final in 2 weeks’ time. Without being disrespectful to the other two teams left, the Narellan Jets and The Oaks Tigers, it’s nigh on impossible to imagine this weekends’ clash of the Titans being anything but a dress rehearsal for the main game of the season.

It’s doubtful that anyone around Group 6 has ever seen a single team dominate the local competition the way these two heavyweights have this season.
A quick look at the competition ladder shows the magnitude of the gulf between teams 1 and 2 and the rest.

Having finished the season with only 1 loss each (to each other) and with a for and against more than 500 points better than the 3rd placed Narellan Jets (the only other team to finish with a positive +/-), the two sides shared top billing at Seasons end. Camden claimed the minor premiership due to a slightly more impressive for and against, giving them week 1 of the semi-finals off, last weekend.

If there was any doubt as to the dominance of these two it was quickly disregarded when Picton trounced Narellan in the qualifying semi-final last weekend by 66-24 (after leading 40-0 at half time), at Kirkham Park, Camden.

There’s little doubt that if, hypothetically, either of these sides were not present this season the other would stand alone atop of the contenders for the CRL’s major prize, usually awarded to an undefeated premier.

This got me thinking about the leading contenders around the other competitions in country NSW. When I started to research them I came to a startling realisation: Not only are both of Picton and Camden still in contention for the Claytons Cup, but they are statistically the two best teams across the CRL at the conclusion of all regular seasons.

The only club that appears to better them is the ‘South West Rocks Marlins’ of the Hastings League. I have disregarded them, however, because according to the official website their competition stats only go up to round 10 and have not been updated in two months, making it impossible to accurately compare them. It has been confirmed, however, that they were recently beaten by the Kendall Blues, ending their undefeated status.

The table below compiles all of the major stats from the minor premiers of each senior first grade competition across CRL for 2015 as well as the 2nd placed Picton side. The data has been sorted by the ratio of ‘points for’ to ‘points against’ measured as a percentage. This is the most precise way to compare competitions with seasons of varying lengths. 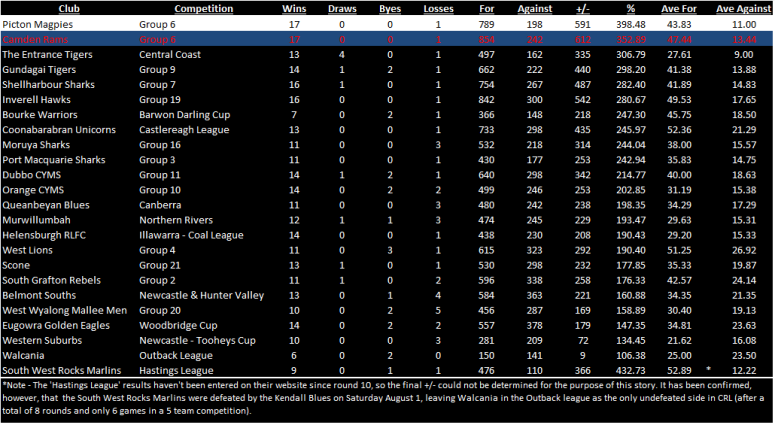 Picton co-coach Bryce Poisel was pleased by the stats but remained focussed on the job at hand. “It’s pretty impressive” he said. “Well done to both sides. It’s something that we haven’t really thought about, since we lost that game to Camden. Our main goal is just winning the comp and if we can do that, anything else is a bonus”.

Camden captain-coach and halfback, Scott Borg also gave credit to the quality of competition in general. “It’s great for the group as well” he declared. “We do have some quality players out here and if we eventually got everyone on the same field in the rep games I think we (Group 6) could compete against some of the bigger areas.”

Borgs’ assessment is a valid one, considering the vast array of players with NRL experience appearing in the competition in season 2015. Camden have Ray Cashmere and Dean Collis, Picton have Michael Lett. Add to that Bryce Gibbs and Stuart Flanagan at the Appin Dogs, Drury Low (Narellan Jets), and Sione Kite, Eddie Paea, & Matt Groat (Thirlmere Roosters).

Regardless of any claims on the Claytons Cup, one thing is for certain: In years to come these two will be the benchmark that fans measure future successes against. I hope local viewers take the time to acknowledge the extraordinary talent on display.

Catch all the rugby league news from the Macarthur region at Macarthur Rugby League Wrap.

Here is the first ever episode of the Macarthur Rugby League Podcast.
I am joined by
– Coaches Scott Borg and Bryce Poisel ahead of the hugely anticipated Camden vs Picton clash.
– Ben Baker from the East Campbelltown Eagles to talk about his trial for the NRL Rookie TV show.
– And I go in depth with Scott Morris from the Western Suburbs Magpies Fanatics to talk about the petition to return the Magpies to the NRL, their fractured relationship with Balmain, and the future of the Magpies.
Scott Borg @ 2:42
Bryce Poisel @ 9:24
Ben Baker @ 14:50
Scott Morris @ 19:28