Question for all the Bennett bashers on social media:

Did you actually watch his post game press conference? How about, have you actually read any of the stories that accompany the sensational misleading headlines on social media where you are commenting and calling him a ‘sore loser’? 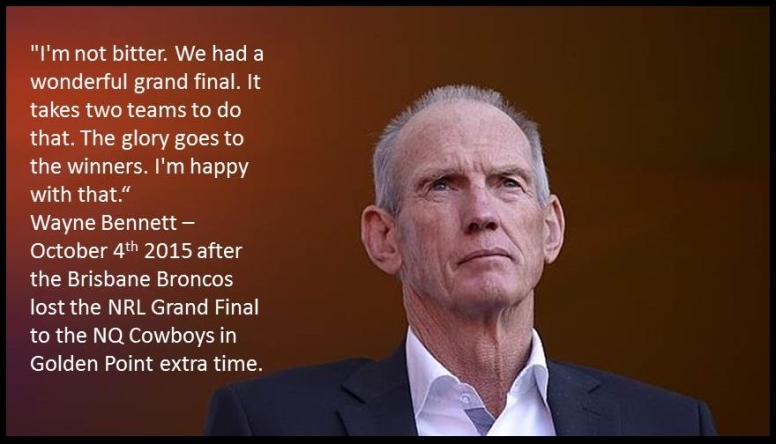 Let’s clear a couple of things up:

– Bennett did not “call for an introduction of Grand Final replays” as the headline on Brisbanetimes.com.au would lead you to believe. If you read the article you’d know that he merely suggested that a replay was preferable to losing in golden point. A position which should not surprise given his vocal opposition to golden point ever since its introduction.
His actual quote was: “I’ve never been a fan of golden point…. It’s a lottery. It’s unfair on everybody. Most unfair here tonight. I’m happy to come back next week and play. I don’t see what’s wrong with the draw…. You’re talking about a grand final, everything on the line. It’s not the way I want it decided.”

– He did not express ‘sour grapes’. On the contrary, he praised the quality of the game and the tremendous efforts of all players involved. “I’m not bitter. We had a wonderful grand final. It takes two teams to do that. The glory goes to the winners, I’m happy with that.”
He went on to attempt to explain the lack of closure that such a loss delivers: “Bottom line is it was an outstanding game of football. The game is designed for you to lose. We got beaten by a field goal. Do we feel beaten? No we don’t. It’s not about winning or losing all the time. They’ve been brave all season.”

– The Cowboys won the Premiership on the back of a pressure field goal from one of the all time greats. In order to kick that field goal, Thurston had to rely on the sheer luck of a coin toss, the poor fortune of the Broncos in the momentary lapse in concentration from Ben Hunt, and the fact that Hunt was not afforded 20 minutes of extra time to attempt to make up for his blunder. Does that mean the Cowboys did not deserve the win? No, of course not. Which is why Bennett did NOT say anything of the sort. Does that mean that it is an extraordinarily harsh way to lose a Grand Final? Absolutely. Which may explain why Bennett said the following:
“The Cowboys weren’t better than us. The end result at full-time was 16-all. It was decided in golden point.” A factual statement, completely lacking in hysteria. Something which unfortunately can not be said for the masses glancing at click-bait headlines and making outlandish assumptions from there.

So, Bennett haters. You can hate. That’s fine. Just, please try to be an informed hater. Actually read the story you’re commenting on. And for the record, I’m not a Broncos supporter. I just have no patience for the ill-informed.

Ahh, who am I kidding. The people I’m addressing would not have read this far anyway.