In an unexpected turn of events Group 6 management has today produced copies of the ‘Senior Player Availability Agreement’ with the signatures of Picton Magpies players Jack Twist and Anthony Provost.

In Thursday nights’ story it was revealed that Group 6 Chairman Graeme Andrews believed both players signed the form stating they were aware of the two game suspension that accompanies withdrawing from any representative team. Both players claimed to have no recollection of signing the agreements. Group 6 Executive Officer Steve Hazleton, who was unable to produce the documents for the original story, was able to locate them today.

When presented with this new evidence dated 13/04/16 Twist declared “I got there late that session. I was certain I didn’t (sign), but there’s the proof I guess”. He went on, however “Provo (fellow suspended player Anthony Provost) thought we might’ve signed something in the carpark in the dark after Group 6 training one of those nights. Neither of us remember real well, but obviously we assumed it only applied to the Group 6 team because that’s what we were playing at the time. Looking at the document (pictured below) now, it does say the Country Bulls, but it doesn’t mention when they (the Bulls) were playing or how long the camp was for.” 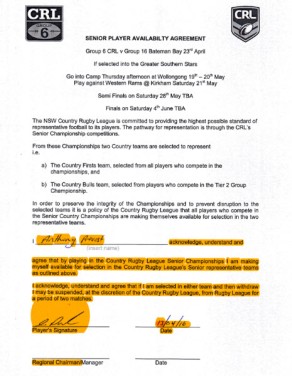 Twist continued to voice his objections “if we’d have realised it conflicted with our holiday to Europe we wouldn’t have signed. But, then what? If we don’t sign that we’re refusing to play for Group 6 which means we get stood down from our club games as long as Group 6 are playing. Now, we go away on our holiday to Europe, which was booked and paid for, and a couple months later when we get back we get stood down by CRL. Is that fair? Looking back, did we ever have any possible way of not being suspended? Because, apart from cancelling a $20k holiday with no refund, I don’t see an alternative. It’s lose, lose.”

Provost, when contacted about the new information earlier was equally discouraged “I don’t know. I remember signing some documents in the dark after Group training. That must have been it”. He went on to express his disappointment “I wasn’t even going to play in the Group team. I didn’t want to risk injury before an 8 week trip to Europe. I told Russ (Group 6 coach Russell Lewis), but he talked me around. I only played because I respect him and being mates with a lot of the guys made it easier. But now, if I could turn the clock back….”

Provost went on to express his mixed emotions at being picked for the Country Bulls “Graeme Andrews called us to congratulate us and even said “it’s a shame you can’t play because you’re off to Europe”. We called them (CRL) up to say we couldn’t make it and they said it was understandable. Now, to get this sort of treatment 10 weeks later, it’s just not right”.

Picton Magpies secretary Karl Klein considered the signed documents under a different perspective. “Where do I start with those documents? First of all, they’re not signed by Kevin Felgate (CRL Regional Manager – Greater Southern) where they’re supposed to be, so they’re not binding. Have they just been stuffed in a drawer until today?”

Klein went on “second of all, it states ‘at the discretion of the Country Rugby League’. That means they (the CRL Board of Directors) could’ve chosen not to apply this punishment, considering how grossly unfair and harsh it is.”

He concluded by expressing his disappointment for the players. “Forget about the club, I just feel for these players who busted their arse for the Group and then for (Greater) Southern. This isn’t the NRL. It’s park footy. These are just young men that work for a living and play footy in the town they grew up in because that’s what all their best mates do.”

The CRL is yet to issue a comment on the matter.